It's been awhile since players have been able to redeem UDE Points for WoW Loot. This is due to Upper Deck no longer handling the WoW TCG. Unfortunately, those of you with a lot of stored up UDE Points, or worse yet, UDE points cards, are likely going to be victims of this Blizz / UDE falling out.

UDE is no longer recognizing redeemable points for the World of Warcraft Trading Card Game. They are (supposedly) working towards a system that will allow players to spend the points they have on file. This may or may not happen, but what is certain is that those of you with non-redeemed points cards may as well use them to start your next BBQ. I seriously doubt that any UDE Points cards which have not been redeemed as of yet, will ever be redeemable through the Cryptozoic/Blizzard system moving forward.

It would be nice if Blizzard, Cryptozoic and Upper Deck could work together and find some sort of interim solution that would allow for UDE Points redemption. Perhaps simply make them all redeemable for Landro's Gift Boxes or something. It seems a shame that all of the non-redeemed UDE Points cards that are floating around out there have essentially no value now. Oh well… these things happen. People just have to be aware and strike while the iron's still hot. 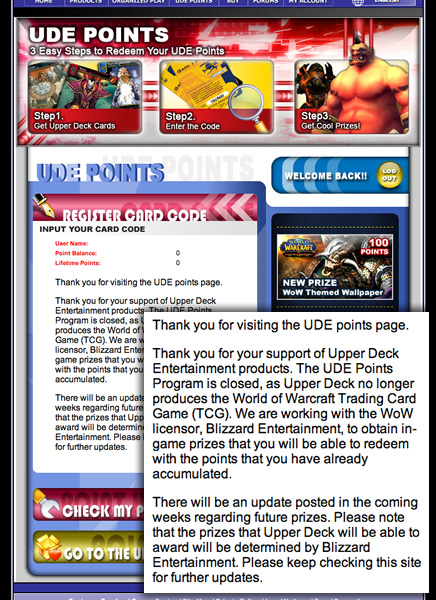 There is an official message displayed at the UDE Points Store, but it is only visible after logging in. It seems that UDE is working towards finding a solution that will offer some sort of consolation for unredeemed points, but there is no acknowledgment of unredeemed cards.

Any updates on the future redemption of existing UDE Points will be posted as information is obtained.

In the meantime, it's probably advisable to voice your opinion and concern on this matter in the official WoW TCG Forum. The more people that petition for this redemption of unspent points, the more likely it will happen, instead of it just being slyly swept under the rug.