Magic Rooster…The Cock of the Walk 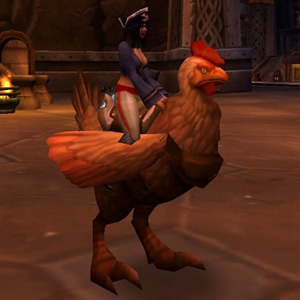 This mount is definitely one-of-a-kind. One can't help but think of the Looney tunes' Roadrunner when watching the running animation on this mount.

It also possesses some amusing behavior and emotes. While standing still, the Magic Rooster will occasionally clean its feathers. When the mount is stationary, a press of the space bar will get it to rear its head and cluck. 😉

The Magic Rooster Egg is not bind on pickup, so it may be traded in-game or sold on the auction house before it's been used. Average buyout price for this mount is around 1.8M Gold (as of Patch 8.0.1).

Note: The tooltip shows that you must be level 40 to use this mount, but as of Patch 5.0.4 all characters level 20 and above can use it. 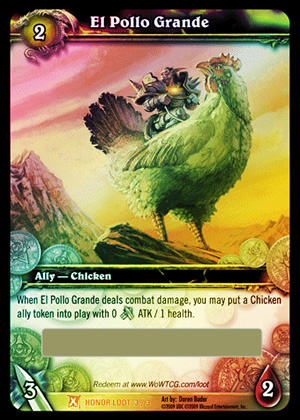 The El Pollo Grande Loot Card is found in packs from the Fields of Honor Expansion Set.

The El Pollo Grande loot card is found in approximately 1 out of 242 packs, which makes it a very rare card.

Fields of Honor booster boxes run about $325.00 each and contain 24 packs of cards. At that rate, the estimated cost to acquire the El Pollo Grande Loot Card if you were to try and pull it from a pack would be approximately $3,250.00.