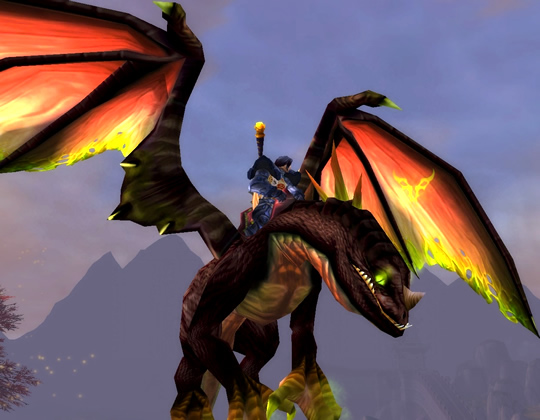 The Feldrake loot card is found in booster packs from the War of the Ancients expansion set. Like all other WoW TCG mount loot, it is very rare – found in only 1 out of 264 packs.

The Feldrake closely resembles the Black Drake – looted from 3D Sartharion – but with a few more added touches. The Feldrake has a floating Mark of the Burning Legion above its head, along with some cool glowing accents (claws, tail, eyes, wing edges and saddle detail), and its wings are slightly tattered. This mount is very badass looking.

Note: The Feldrake had been plagued by a glitch that prevented its use in BGs or other ground-mount-only zones. This bug has been addressed and the Feldrake can now be used as a ground mount; however, it does have a minor visual bug which causes it to twitch when jumping. This should be addressed in a future patch, though.

Use of the Feldrake requires level 20 and Apprentice Riding skill.

The Feldrake is bind on equip, so this loot can be traded in-game or sold on the auction house. Average buyout price for the Feldrake mount loot is about 1.8M Gold (as of Patch 8.0.1). 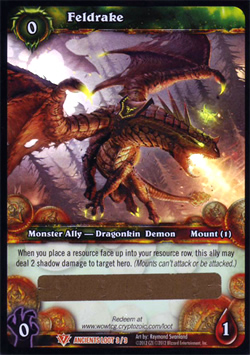 The Feldrake loot card is part of the War of the Ancients WoW TCG expansion. This loot card typically sells for just under $200, which is pretty cheap considering the rarity of this card.

War of the Ancients booster boxes go for about $300 each, with the Feldrake found in about 1 in 264 packs. At that price, you could easily wind up spending nearly $2200 ripping through packs trying to find the Feldrake loot card.

Grab it off ebay for around $1000 and you'll save yourself a ton of money and frustration. 🙂