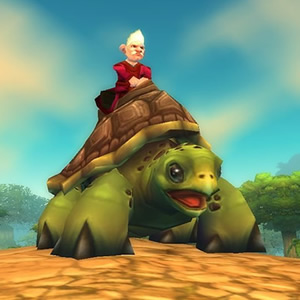 The Riding Turtle is obtained via a loot code from the Saltwater Snapjaw Loot Card.

The mount travels at normal running speed, which makes it more or less a vanity item. However, Since it is a mount, items (ie: Mithril Spurs, Riding Crop, …), talents (On a Pale Horse, Heart of the Crusader, etc.) & glyphs (e.g., Glyph of Pathfinding) that affect mounted speed will give the Riding Turtle some giddy-up.

Note: Although this mount travels at normal run speed while on the ground, it does move faster in the water. The Riding Turtle will increase your swim speed from 60% to 100%, making this mount a cool novelty to have on hand when traveling through water!

This mount has no level requirement, nor does it require any riding skill, therefore it can be used by even a level 1 character!

The Riding Turtle is bind on pickup, so you will not be able to sell this mount in-game. It can be obtainable in game however, as there is a very small chance that it could be found within an Unclaimed Black Market Container.

Here's a quick look at the Riding Turtle (go to 3:30 if the video doesn't auto-start there.) 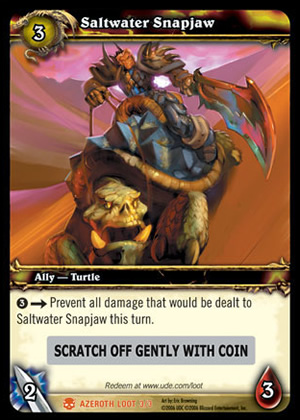 The Saltwater Snapjaw Loot Card is found in packs from the Heroes of Azeroth Expansion Set.

The Saltwater Snapjaw loot card is found in approximately 1 out of 484 booster packs, which makes this an extremely rare card!

Heroes of Azeroth booster boxes run about $50.00 each and contain 24 packs of cards. At that rate, the estimated cost to acquire the Saltwater Snapjaw loot card if you were to try and pull it from a pack, would be approximately $1,000.00!

Average ebay price for this loot card is usually less than $150.00.