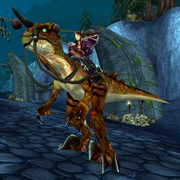 The Savage Raptor loot card is found within booster packs from the War of the Elements WoW TCG expansion. 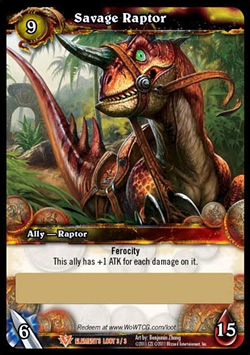 The Savage Raptor mount has the same paint job as that of King Mosh, the Devilsaur in Un'Goro Crater. The coloring and patterns are the same as Mosh, but the Savage Raptor earns additional style points for his awesome horn.

The Savage Raptor is nearly identical to the Reins of the Red Primal Raptor, which comes from Primal Egg – a drop from the elite dinosaurs in Isle of Giants. Farming for the egg can take awhile, plus there's still a 1 in 3 chance you'll get a red Raptor mount when it does drop. Depending on how badly you want a raptor mount, the path of least resistance may be to go for the loot card. 😉

Savage Raptor is a rare loot card — found in only 1 out of 242 booster packs.

So… you could try for the card that way, or do the sensible thing and grab one off ebay for a fraction of the price.