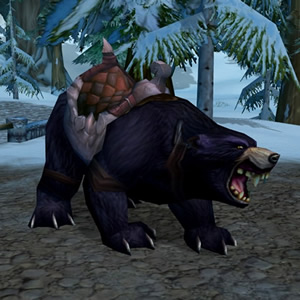 This mount is obtained from The Red Bearon loot card which is part of the Drums of War Expansion Set.

The Big Battle Bear is a no-nonsense bear with a saddle. He's not all armored up and he doesn't wear goggles, unlike most of the other bear mounts in WoW. Big Battle Bear is very dark, being mostly black with hints of dark purple. This is a very nice looking bear mount.

Big Battle Bear can be sold or traded in-game. Average auction house buyout price for this crazy cool ground mount is around 140,000 Gold (as of Patch 5.4.2). 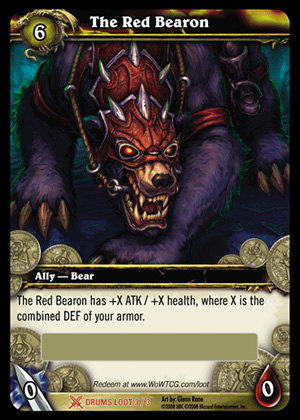 The Red Bearon Loot Card is found in booster packs from the Drums of War Expansion Set.

Drums of War booster boxes run about $45.00 each and contain 24 packs of cards. At that rate, the estimated cost to acquire The Red Bearon Loot Card if you were to try and pull it from a pack would be approximately $450.00.