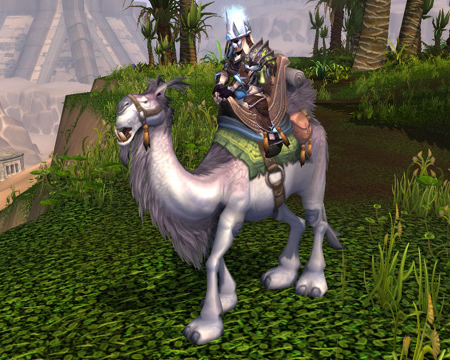 The White Riding Camel is the loot reward from the White Camel Loot Card. The White Camel loot card is found within booster packs from the Tomb of the Forgotten WoW TCG expansion.

White Riding Camel looks similar to the other camel mounts in the game, only, it's…you guessed it…white! It's a nice looking mount, although it does fall a little short compared to some of the more dazzling options available through the WoW TCG. However, it is fairly inexpensive to acquire which makes it an attractive option for WoW mount collectors and camel hoarders.

The White Camel loot is bind on equip, so it may be traded or sold in-game. Average buyout price for the White Riding Camel is around 125,000 Gold (as of Patch 5.4.2). 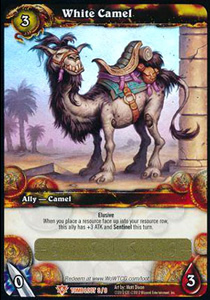 The White Camel Loot Card is found in packs from the Tomb of the Forgotten Expansion Set. This loot card is found in approximately 1 out of 264 packs, which makes it a very rare card.

Tomb of the Forgotten booster boxes run about $45.00 each and contain 36 packs of cards. At that rate, the estimated cost to acquire the White Camel Loot Card – if you were to try and pull it from a pack – would be approximately $330.00.

Average ebay price for this loot card is only about $80.00.