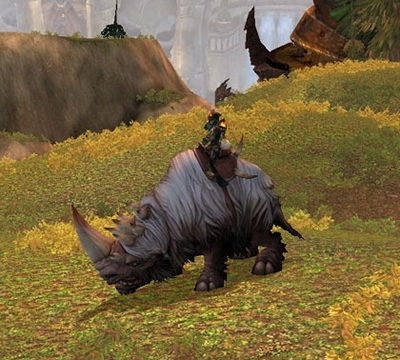 This mount is truly awesome. Probably the only thing they could do to improve upon it would be to give the Wooly White Rhino its very own Tickbird that follows it around, perching on the horn when idle.

Hunters who are looking to match this skin with their pet can do so by taming any of the following rhinos: Gal'dorak (level 50 rare), Icehorn (level 71 rare), Ice Steppe Bull, Ice Steppe Rhino, or Romping Rhino.

The Wooly White Rhino is bind on equip, so it can be sold or traded in-game. Average buyout price for this super-cool mount is around 195,000 Gold (as of Patch 5.4.2).

The following is an entertaining video demonstration of the Wooly White Rhino mount. It gives a good preview of the different animations, as well as a glimpse of what it looks like in Shadow form. 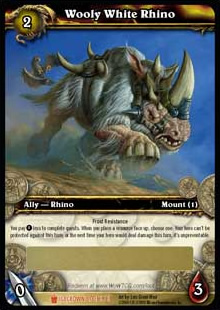 Icecrown booster boxes sell for approximately $60.00 each and contain 24 packs of cards. At that rate, the estimated cost to acquire the Wooly White Rhino Loot Card from a random pack would be approximately $600.00.

Average ebay price for this loot card is only about $700.

This is a really fun mount with a lot of character. Not only that, but it's also scarcely seen, making it a pretty good bargain at under $200.