This latest expansion for the WoW TCG features 3 all-new loot cards, including an epic flying mount and the first non-consumable super-common loot card. 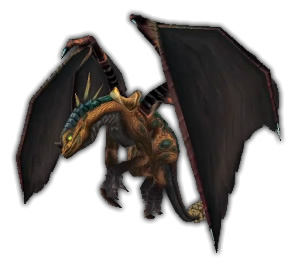 The Mottled Drake is a very rare card. It is found in approximately 1 out 242 booster packs of Worldbreaker.

Click here for additional information and a further description of the Mottled Drake.

The Grim Campfire loot card awards players with the skill to create an eerie campfire – complete with a decorative ensemble of skulls and bones, set ablaze with a purple flame. It shares the same 5 minute cooldown as that of the Basic Campfire, and does essentially the same thing… it just looks much cooler. You can use the Grim Campfire to cook food, however, it won't increase anyone's spirit. If anything, it'll leave players a little uneasy. 😉

Grim Campfire is found in approximately 1 out of 121 booster packs of Worldbreaker.

The most notable thing about Landro's Lil' XT is that it's the first non-consumable super-common-loot offered through the WoW TCG. Prior to this newest pet loot, all super common loot cards were issued with charges. Once the charges were used up, so was the loot. Landro's Lil' XT, however, is an unlimited use pet. 🙂

Cryptozoic just announced today that the next expansion for the WoW TCG will be released on December 14, 2010 – one week after World of Warcraft: Cataclysm hits live servers.

The WoW TCG Worldbreaker Expansion Set features some exciting new loot, including the first ever non-consumable super common loot. Starting with the Worldbreaker expansion, Cryptozoic is happy to announce that all new super common loot from this point forward will be in the form of an unlimited use in-game pet!

Landro's Lil' XT is the first upgraded super-common loot. The pet is basically the same as the Lil' XT pet from the Blizzard store, only with a new paint job. Landro's Lil' XT will be found in approximately one out of every 11 booster packs of Worldbreaker. It's doubtful that Landro's Lil' XT will be a bind on account pet, however. At 1 in 11 packs, I'm guessing it will be character-specific like the rest of the WoW TCG Loot, rather than BoA, as is the case with items purchased through the Blizzard store.

Even though the Landro's Lil' XT loot cards are going to be really common, they're still found in only 1 out of 11 packs. With booster boxes of Worldbreaker fetching around $60 each (before S&H), that puts an average price tag of nearly thirty bucks on this new pet.

[phpbay]grim campfire loot, 2, “150192”, “”[/phpbay]
The rare loot in Worldbreaker is the Grim Campfire. This item looks to be an alternative to the standard cooking fire, and will actually be usable for cooking food. No spirit buff though. 😉 Not much is known about the Grim Campfire other than it will probably be… spooky. This item is sure to be a hit with the role players. The Grim Campfire is going to be found in 1 out of 121 packs.

[phpbay]mottled drake loot, 2, “150192”, “”[/phpbay]
Last but not least… the ultra-rare loot is going to be yet another flying mount. The Mottled Drake is going to be the tough pull from Worldbreaker; inserted at a rate of only 1 in 242 booster packs. No previews have been given of this new dragon mount, but it's probably going to have a similar model as that of the standard drake mounts, e.g., the Bronze Drake from heroic Culling of Stratholme. Based upon its title, the Mottled Drake will most likely be spotted.

Hobby stores are taking pre-orders currently, so if you're anxious to try your luck at getting some of the new Worldbreaker loot, then you may want to reserve a box today.

Update: Worldbreaker has an official release date of December 14, 2010.

The WoW TCG Worldbreaker expansion is scheduled to ship sometime in November 2010. Most retailers are announcing a November 16th street date, but it could possibly be the following week. As soon as a concrete release date for World breaker has been set, it'll be announced here on the site.

Worldbreaker will be the first WoW TCG expansion set to contain playable Worgen and Goblins.

Judging by the tooltip, the Mottled Drake is probably going to look something like the Bronze Drake obtained from the timed event in Culling of Stratholme, but with a spotty or blotchy appearance.

The exact rarity is unknown, but it will likely be 1/242 packs.

[phpbay]grim campfire loot, 3, “150192”, “non”[/phpbay]
The Grim Campfire appears to be the rare loot card from the WoW TCG Worldbreaker expansion, likely to be inserted at a rate of 1/121 packs. Not too much is known about the Grim Campfire, but the tooltip suggests that it will probably be a more visually impressive alternative to the standard cooking fire, but without the uber Cozy Fire spirit buff. 😉

Based on the spell icon, it's expected that this fire may look something like the fires seen in Twilight Cultist areas.

[phpbay]landro's lil xt, 3, “150192”, “”[/phpbay]
Landro's Lil' XT is the new pet loot found in the WoW TCG Worldbreaker expansion. It's possible that Landro's Lil' XT will be a super-common loot card with use charges, similar to some of the other consumable loot, like the Sandbox Tiger and Paint Bomb. However, there is no usage limit indicated on the tooltip, so it may be another rare loot card (1 in 121).

Landro's Lil' XT will probably look and behave similar to the standard Lil' XT pet available from the Blizzard store, but who knows… maybe it'll have a few surprises of its own.