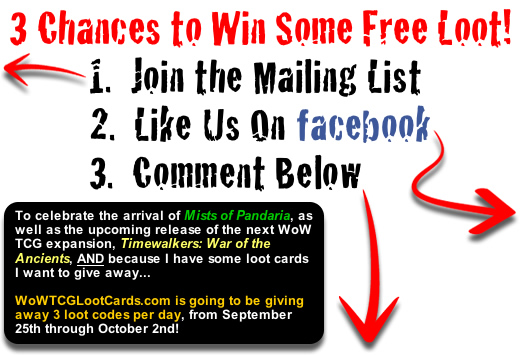 END_OF_DOCUMENT_TOKEN_TO_BE_REPLACED

Blizzard held a press event yesterday, sharing all sorts of juicy updates about what's to come in Mists of Pandaria. Among the deluge of news…some insight into how the Pet Battle System is shaping up.

Here are a few key updates regarding the pet battle system…

So there ya go… the Pet Battle system is deep in development and seems to be shaping up pretty nicely, although I'm not entirely sure I like the idea of the system only tracking wins. I think for the pet battles to really catch on and become a popular WoW mini-game – there will need to be a slightly more competitive atmosphere to it.

I think a little less anonymity would be a welcome change, but I can see keeping player dialogue out of it. In my opinion, there's little at stake in this, so why not let players enjoy being a bit more casually competitive with it? As long as the trash-talking is kept out of it, why not let the top “pet battlers” attain some glory..?!

If you lose a bunch…who cares? However, if you end up being a top pet battle strategist, it'd be nice to make a name for yourself in certain circles. 😉

A few weeks ago at BlizzCon, WIRED.com sat down with WoW Production Director, J. Allen Brack, and asked him some questions about the upcoming expansion, Mists of Pandaria. Some of the Q&A was specifically targeted at the announced Pet Battle System that will be coming in MoP.

Here's what he had to say…
END_OF_DOCUMENT_TOKEN_TO_BE_REPLACED

Here are some excerpts from Blizzard's Mists of Pandaria live developer chat that took place this evening (10/27). The following blue responses are the ones related to the upcoming Pet Battle System. If you want a recap of the entire chat, then WoWHead has a transcript available on their blog.

“With MoP you're introducing the pet battles. Will that be a new way of earning XP and/or valor points?”

We are hoping to implement XP gain for pet battles in a similar way to what players see with gathering professions now. You would not want to level your entire character just on pet battles, but we do think you should be rewarded for participating in it.

“Will pet battles be created the same way as duels?”

We will let players duel other players that are near them in the world, but we will also have a queuing system you can join to fight against other pet trainers of similar level.

We will have an option to disable invites to pet battles. Similar to what we have for player duels.

“There seemed to be a bit of a backlash at BlizzCon against the idea of counters in the Pet Battle System. An example would be a water-based pet (Murloc) vs. a fire-based pet (Lil' Ragnaros). This makes the fighting seem a bit more intricate, but I can understand the desire to have Pet Battles be easier to approach. Is there any thought to more than one skill level?”

We intend to create a simple combat system with some engaging depth. We're still in the process hashing out the details. Suggestions are certainly welcome! 😉

The new cap for professions is 600 and we are currently not planning to add a new profession. We are hoping that pet battles will offer a fun, new type of activity for players to do that offers an alternative to player power progression.

“Will there be any grasshoppers?”

Yes! It actually just got checked into the game by the artists today! Going to be awesome to use in pet battles!

“Can other people watch the pets battle?”

We are working really, really hard to have spectating for the pet battles. Trust me, we want it just as bad as you guys. Stay tuned.

There ya have it… A bit more news on the upcoming Pet Battle System. It just keeps sounding better and better doesn't it?! 😀

During this past weekend's BlizzCon, Blizzard announced that companion pets were going to become bind on account in their next expansion, Mists of Pandaria. This move is being ushered in due to the new Companion Pet Battle System that's going to be introduced in the next expansion.

The Pet Battle System is going to shine a whole new light on how we view our companion pets. Instead of just merely being vanity items, we'll have the added ability to name them, train them and then form teams where we can pit our pet's battle skills against other players' or other NPC pets. It's going to be amazing!

This will no doubt be good news for those of you who collect the various WoW TCG loot pets, as pretty soon they'll be accessible to your entire fleet of characters..!