MMO-Champion just announced that Patch 4.3 will be going live this coming Tuesday, and along with this bit of news...images of the new 4.3 mounts were posted as well. Among the various Patch 4.3 mounts...the Swift Shorestrider! It look as if my second guess was correct -- the Swift Shorestrider is the turquoise skin, rather than the ivory model I'd thought it was going to be. 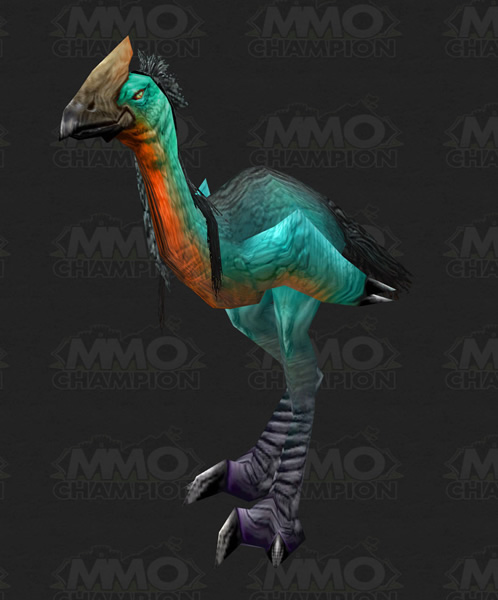 I'd thought that the Swift Springstrider (supposed Noblegarden mount) was going to use the turquoise model, but alas...I was wrong. That said, I'm pleased to see that Blizz is using this skin for the TCG mount. The ivory tallstrider would have been a little blah for a WoW TCG Loot mount.

With Patch 4.3 hitting live servers this Tuesday, the Patch 4.3 TCG loot will finally be redeemable. Those of you that have been waiting to redeem your Wasteland Tallstrider loot cards...Tuesday you'll be able to cash in on this amazing new Swift Shorestrider mount. Grats!

...are coming soon. WoWTCG.com has been mostly offline for the past several hours, for whatever reason, and I just noticed that they've added pages for the Throwing Starfish and Wasteland Tallstrider loot items.

I'll have pics posted as soon as possible. 🙂

I can tell you what I think, though... if I were to bet on it, my guess would be that this new mount loot is going to be white. I have a feeling that it's going to be the Ivory Tallstrider model - same as I previously predicted. 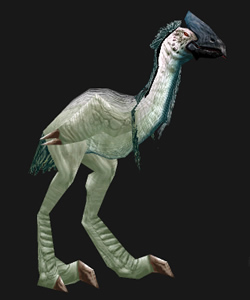 First up, is the obvious... the Wasteland Tallstrider pictured on the loot card is ivory. The last several mounts have been more or less exact matches to the artwork on the loot cards, unlike many of the old WoW TCG mounts that were released while Upper Deck was putting out the WoW TCG.

There are six Tallstrider skins, and currently four Tallstrider mounts in the game data. Based on this info, we can deduce a bit more... 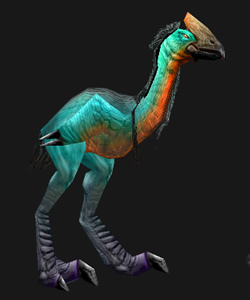 Now... if the Wasteland Tallstrider loot card artwork was not an indicator, then I'd guess the Swift Shorestrider to be the turquoise model. This is because of it being a very unusual and visually striking model, plus it's only found on Tallstriders that live near the coast. Both of those factors would cause me to believe that the turquoise skin would be used for the mount.

But yea... I'm still thinking that it's going to be the ivory skin.

Of course, Blizz could throw a surprise out there and introduce a new skin altogether...

As noted on the WoWTCG blog, the Throne of the Tides loot will be available once WoW Patch 4.3 hits live servers. If you're sitting on a loot code for one of the new loot items, just be patient... this is a huge Patch with loads of new content, so it may be a few more weeks. 4.3 is by far the biggest patch to be released for the Cataclysm expansion... so far, anyway.

The new loot items have yet to be introduced on the PTR, so still no images or videos. As soon as pics or videos are available, I will put them on here posthaste. 😉 I have a feeling they'll be added very soon.
END_OF_DOCUMENT_TOKEN_TO_BE_REPLACED

The new Throne of the Tides loot items appear to be available on the Patch 4.3 PTR, provided you have a promo code. Until I can locate a proper code that will allow me to claim these items from Landro, the only things of note that I discovered were the actual names of the in-game loot.

As a bonus... the loot names for the items coming in the next two expansions were accessible as well. I'll post those later today. Not sure if they'll be redeemable, but I'll try. 🙂

No actual in-game images or videos of these new loots have been posted yet, but here are the tooltips, which offer some clues as to the appearance of the new loot...
END_OF_DOCUMENT_TOKEN_TO_BE_REPLACED

In-game images of the new Wasteland Tallstrider mount have been elusive, but I did manage to spot a pic of the loot card today on eBay. If the artwork is any indication, it looks like this new mount is going to be an ivory colored tallstrider, similar to the tallstriders found in Mulgore and the Northern Barrens. 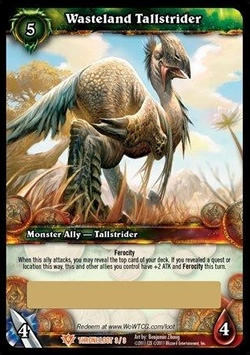 I also saw another image which a seller posted on ebay that depicted the mount as looking like a Lost Torranche -- the purple and green tallstriders found on Sorrow Wing Point, in Terrokar Forest.

To me, that would obviously be a more exciting option - albeit a little flamboyant. However, considering the Wasteland Tallstrider loot card is showing an ivory tallstrider skin, I'm thinking that's what it will probably be. So far, all of the mount loot cards that have been released all have artwork representative of what the mount actually looks like in-game.

Either way, it's going to be an awesome mount, and the very first tallstrider mount available in World of Warcraft. 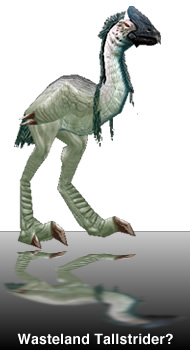 At any rate, we'll know the actual model of the Wasteland Tallstrider pretty soon. Throne of the Tides is set to hit stores on October 11th. In the meantime, I'll be sure to post any pics or video of this exciting new ground mount from the WoW TCG.

The Wasteland Tallstrider is a rare loot card, found in approximately 1 in 242 booster packs of Throne of the Tides.

Sellers are already posting pre-orders on ebay, so grab one up now if you want to be among the first to show off this unique new mount. Average price is under $200 as of right now, which is relatively cheap for mount loot.

Aftermath: Throne of the Tides is the upcoming expansion set for the World of WarCraft Trading Card Game, and is expected to hit hobby store shelves sometime in October, 2011.

An interesting note about Tallstrider mounts...

They have been in the game data for years, but were never actually introduced. It's likely that they were intended to be an available mount type for horde characters, but for some reason, ending up getting scrapped. One theory is that Tallstriders were perhaps going to be added as the Tauren mount, only to be later replaced by the larger and more practical Kodo. It's also possible that maybe Tallstriders were the early concept for Blood Elf mounts.

Regardless... they'll at least be one Tallstrider mount available in-game, come October of this year. 🙂

As for the other two loot cards in Throne of the Tides... no info has been given about them, but it's likely that the common one will be a companion pet of some sort.