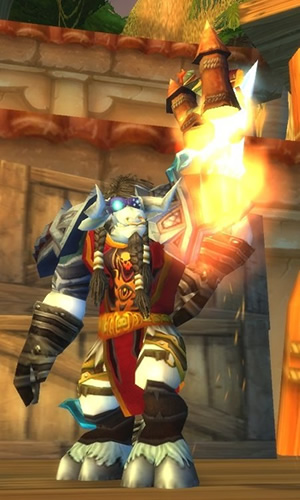 Rocket Chicken is the reward obtained from the Robotic Homing Chicken Loot Card. This item teaches you how to summon a pet Rocket Chicken.

Rocket Chicken has some amusing animations and will even occasionally fly into the air and explode! He'll sit stationary for awhile, pecking about him like a normal chicken, but every so often he'll fire up his jets and start to hover. Once in awhile he'll take off like a shot, straight up into the air and then explode into a poof of feathers. In the event of a rocket malfunction, Rocket Chicken will need to be re-summoned for future use.

After the explosion, the words: Rocket Chicken is killed by Suicide, will appear in your combat log.

To see Rocket Chicken in action, head over to Booty Bay. He's sitting atop a pedestal on the dock right beside the auctioneer.

The Robotic Homing Chicken Loot Card comes from booster packs in the March of the Legion Expansion Set.

The insert rate on this card is 1 in 242 booster packs, which makes it a very rare card.

March of the Legion booster boxes sell for around $55.00 each on ebay, so the approximate cost to obtain the Robotic Homing Chicken Loot Card from a pack would be about $550.00.