Update: Please note that UDE Points are no longer redeemable, however, UDE Points loot codes can still be purchased on ebay. 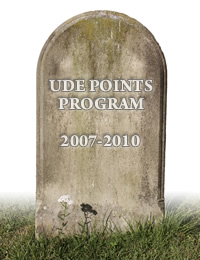 In May of 2010, Upper Deck suspended the UDE Points program, then eventually shut it down completely the following month. This was most unfortunate for players who'd been collecting UDE Points with the intention of redeeming them for some of the sweet loot included on this page.

As a result of the program's shut down, the only way to get any of the UDE Points loot nowadays is by purchasing a loot code that someone had earned by redeeming the UDE Points. As you can imagine, these loot codes are extremely rare.

Fireworks Trinket – Redeem for Perpetual Purple Firework. This item lets you create your very own fireworks display anywhere and anytime.

Ogre Disguise Trinket – Redeem for Carved Ogre Idol. This item transforms you into an ogre for ten minutes.

This in-game loot item will randomly reward you with one of the following prizes:

There are a total of seven epic tabards* that were obtainable through the UDE Points system.

* Tabard of Flame is a reward from the Landro Longshot WoW TCG Loot Card.