The next WoW TCG expansion, Timewalkers: War of the Ancients, is set to release in just over a week – on Tuesday, October 2nd.

The Feldrake bears resemblance to the Black Drake, which is looted from Sartharion in Obsidian Sanctum – if Sartharion is killed while all 3 drakes are still up. 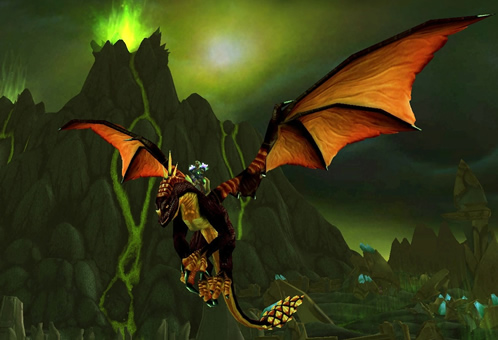 Reins of the Black Drake – Looted from 3D Sartharion

This is much easier to do these days – with players farming this mount with as little as 2-3 players – but there are still reasons why the new WoW TCG loot mount would be considered more desirable than this free in-game “look-alike”.

The Feldrake is a corrupted version of the Black Drake, meaning it has some pretty cool accents – if you're into that sort of thing. The wings of the Feldrake are tattered and the mount has a very cool eerie green glow.

The raddest features on this new mount include the unique Mark of the Burning Legion that floats above its head, along with its awesome green toenails. 😉 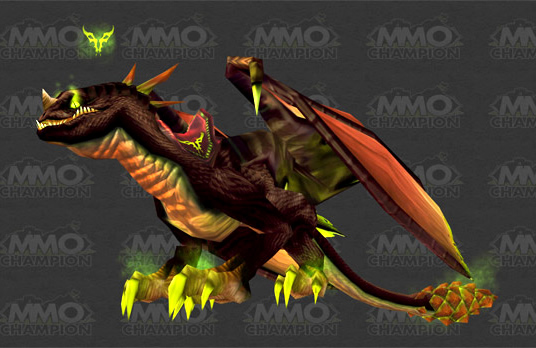 I'm thinking Warlocks will be all over this.

Here's a vido preview of the Feldrake, showing an example of the “fel aura” and the cool Mark of the Burning Legion floating above its head.

There are loads of sellers on eBay offering pre-orders for this new mount. Prices range from about $150-$200, which isn't bad considering the rarity of the Feldrake loot card (1 in 242 packs). Given the price of a War of the Ancients booster box (around $110….), if you do the math, it would likely cost over $1,000 to try and yank the Feldrake card from a pack.

$200 is a no-brainer if you want this mount badly.

Check Out Current eBay Pricing for the Feldrake